Solar street lights are the perfect cost-effective solution not only for the urban population but also for the people living in rural areas that are deprived of electricity.

Since people do not typically travel down every road at all times of the night, figuring out the most active times is key to making the sensor street lights work well. The lights would turn on at dusk and run a set number of hours or time of night, say 4 hours or till 11pm. The lights can either then dim to a lower intensity to still provide lighting or turn off entirely. They can also come back on for a set number or hours before dawn or at a specific time and run full till dawn.

There are now other options for sensors that include having the lights operate at a reduced wattage all night and only have full illumination when motion is detected. This is not as popular as the previous method, but is still an option with most systems. These lights need to take into account more understanding of the active periods to ensure proper system sizing and not be used to undercut the solar and battery.

These types of solar street light application are perfect for neighborhoods and HOAs, even small communities. Use of the sensors can halve the amount of solar needed; therefore, reducing the cost of the solar street light assembly. By lowering the power usage and cost will make solar a more feasible option and help communities be a little greener in the end by reducing their overall electrical usage. 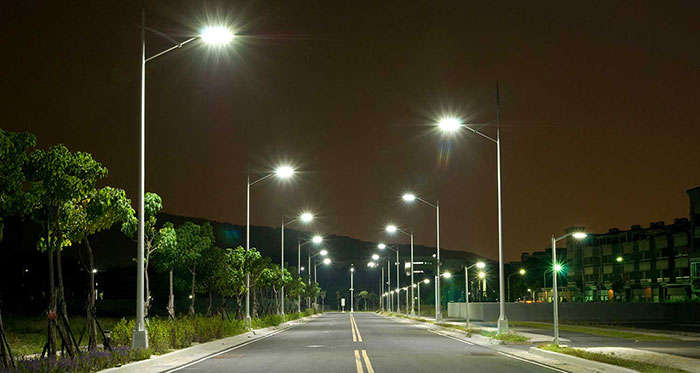 1. Solar photovoltaic (SPV) module: is fixed on top of the pole with suitable inclination to receive maximum sunlight throughout the day. The SPV module produces suitable voltage and current, which is used to charge the battery. During the night, the lamp which is housed inside the luminary lights up by using the energy stored in the battery.

6. Solar Street Light Pole: MS street light pole or GI pole is used to mount the SPV module and the luminary at a height of 4-5 meters above ground.